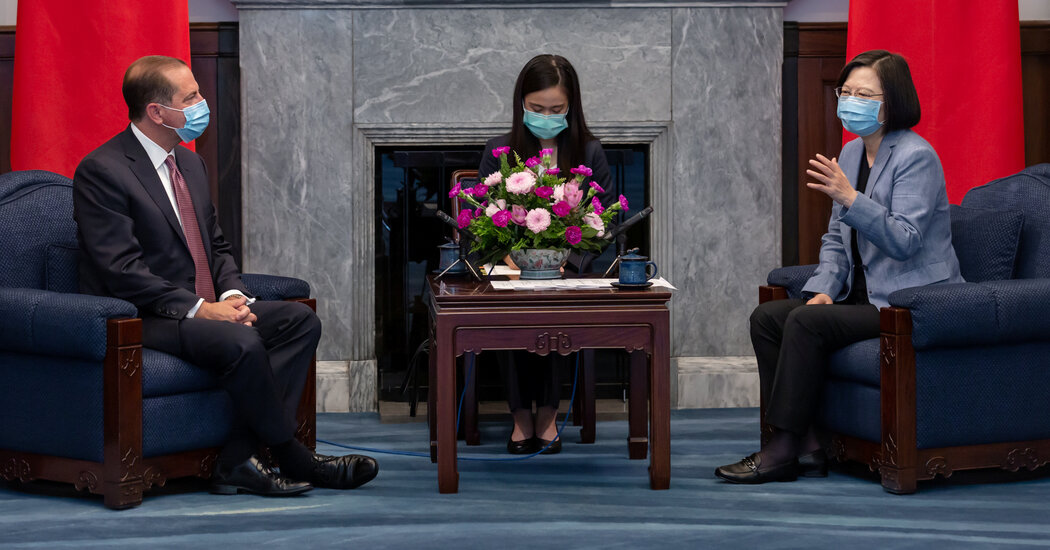 WASHINGTON — A visit to Taiwan by an American cabinet secretary. A sale of advanced torpedoes. Talk of starting negotiations over a potential trade agreement.

The Trump administration has taken action in recent weeks to strengthen United States relations with the democratic island of Taiwan and bolster its international standing. The efforts are aimed at highlighting a thriving democracy in Asia and countering China’s attempts to weaken the global diplomatic status of Taiwan, which Beijing claims as its territory.

That feeds into a bigger campaign by national security officials: to set the United States on a long-term course of competition and confrontation with China that any American president, Democratic or Republican, will find difficult to veer away from in the future.

“Taiwan is the most important thing from a military and credibility point of view,” said Elbridge A. Colby, the former deputy assistant secretary of defense for strategy and force development. Mr. Colby wrote the Trump administration’s national defense strategy, which emphasizes competition with China and Russia.

Taiwan has been a fraught issue between Washington and Beijing for seven decades, and it is re-emerging as a potential focal point of tensions, as United States national security officials press their campaign against China. The officials also see bolstering Taiwan in a more urgent light given the crackdown on civil liberties in Hong Kong by Xi Jinping, the leader of the Chinese Communist Party.

President Trump himself admires Mr. Xi and is “particularly dyspeptic about Taiwan,” once comparing it to the tip of a Sharpie marker and China to the Resolute desk, John R. Bolton, the former national security adviser, wrote in his new book. And the president is willing to sacrifice U.S. support for the democratic government for trade relations with China, he added. But campaign strategists have told Mr. Trump that he needs to appear tough on China for re-election purposes, giving pro-Taiwan U.S. officials an opening.

President Richard M. Nixon began a process of diplomatic opening in 1971 with Communist-ruled China to get Mao Zedong’s help in countering the Soviet Union. The United States established diplomatic ties with China in 1979 and broke off formal relations with Taiwan, which had been a sanctuary for the Kuomintang, or Nationalists, since their loss in the Chinese civil war 30 years earlier. Every U.S. administration has tried to maintain an ambiguous position on Taiwan based on the “One China” policy.

The ambiguity has helped maintain stability across the Taiwan Strait, one of the most militarized areas in the world. But as China has grown stronger and more assertive, and as Mr. Trump has begun dismantling international commitments under his “America First” foreign policy, some U.S. officials and Washington policy experts say the United States’s traditional approach to Taiwan helps hard-liners in Beijing and increases China’s threat to the island’s 24 million people.

Those officials, as well as Republican and Democratic lawmakers, aim to do as much as possible to show explicit U.S. support for Taiwan. They want to send military signals to China and to make relations with Taiwan as close to nation-to-nation as possible, short of recognizing sovereignty. Though Mr. Bolton openly advocates full diplomatic relations, many U.S. officials, including even some China hawks, have been more reluctant, fearful that such a move would mean a complete break with Beijing.

The White House has publicly criticized as “Orwellian nonsense” China’s efforts to force American companies, including airlines and hotels, to use language indicating Taiwan is part of China. Some officials have discussed bringing Mandarin Chinese-language teachers from Taiwan to the United States as they try to get American schools to break ties with the Beijing-run Confucius Institutes.

In May, American officials led a failed effort at an assembly of the World Health Organization to get Taiwan observer status, over China’s objections.

But last week, Washington and Taipei orchestrated a diplomatic show of force. Alex M. Azar II, the U.S. secretary of health and human services, met on Aug. 10 with Tsai Ing-wen, Taiwan’s president, in Taipei, in what was the highest-level visit by an American official to the island since 1979. Two days later, Ms. Tsai gave a video talk hosted by two policy research groups in Washington in which she stressed the need to strengthen military ties and establish a free-trade agreement.

“Foremost amongst my priorities is to establish a constructive security relationship built on the clear understanding of our shared interests in the region,” Ms. Tsai said.

A core element of U.S.-Taiwan ties is the Taiwan Relations Act of 1979, which obligates Washington to provide weapons of a “defensive character” to Taiwan. Democratic and Republican administrations have adhered to this. Last summer, Mr. Bolton helped push through two big packages: an $8 billion sale of 66 F-16 fighter jets and a $2.2 billion sale of 108 Abrams tanks. In May, the administration notified Congress of an intent to sell $180 million worth of advanced torpedoes.

But some administration officials argue the arms sales, and increased transit by U.S. warships through the Taiwan Strait, fall short of what Washington needs to do. They say Washington must make clear to Beijing and Taipei that it would defend Taiwan if the People’s Liberation Army tried an invasion or a blockade. The Taiwan Relations Act does not address that, and past administrations have left the matter vague.

“We need to change things on Taiwan to improve the deterrent and make clearer where we stand, especially by ending any remaining ambiguity about how we’d react to the use of force and altering our military force structure and posture,” Mr. Colby said.

The administration is unlikely to try to station troops in Taiwan. But a port call is possible, as are visits by officers in uniform and training programs in Taiwan, U.S. officials say.

From the perspective of Taiwanese officials, bolstering economic ties is also critical. In her talk, Ms. Tsai called for the start of negotiations over a free-trade agreement. “We hope that the U.S. recognizes the broader strategic implications such an agreement will undoubtedly have,” she said.

When asked on Thursday at a news conference in Slovenia about Ms. Tsai’s request, Secretary of State Mike Pompeo said, “We’re trying to figure out precisely how to proceed with that.”

Market access issues, especially over exports of American pork and beef to Taiwan, could hinder talks. But Kurt Tong, a former U.S. ambassador who specializes in Asia, wrote in May that an agreement “makes good sense as a matter of trade and economic policy — as well as China policy and Taiwan policy.”

No matter the policy options, the United States should “make clear its support for Taiwan,” said Shelley Rigger, a political scientist at Davidson College.

But she cautioned that U.S. officials should formulate Taiwan policy based on strengthening the island rather than striking at China.

“It doesn’t seem to get said enough: There’s a certain sense of conflation or confusion of what it means to be helpful to or supportive of or affirming Taiwan versus taking a position that is more challenging to the P.R.C.,” she said, referring to the People’s Republic of China. “How willing are U.S. officials to pull Taiwan into that deteriorating picture, and how willing are they to be attentive to voices that say, ‘Be careful’? Beijing won’t punish Washington, but it can punish Taipei.”

Some analysts have criticized Mr. Trump for his apparent lack of knowledge of the nuances in the U.S.-Taiwan relationship. In December 2016, before taking office, he and Ms. Tsai talked by telephone — the first time an American president or president-elect had spoken to a Taiwanese leader since 1979. Though pro-Taiwan policy experts in Washington welcomed it as an overdue move, the action created tensions with Beijing that Mr. Trump’s son-in-law, Jared Kushner, scrambled to defuse. It was clear Mr. Trump had no idea of the import of the call.

The administration took a restrained approach with Mr. Azar’s visit. Mr. Azar stuck to a carefully calibrated message throughout his three-day trip, referring to Taiwan as a “jurisdiction” and limiting his criticism of the Chinese Communist Party mainly to health-related issues.

U.S. officials said the visit was aimed at highlighting Taiwan’s success in containing the coronavirus outbreak.

China expressed its displeasure by sending two fighter jets across the median line of the Taiwan Strait. On Thursday, China’s military said it had conducted several live combat drills near Taiwan “to safeguard national sovereignty” and implied the exercises were connected to Mr. Azar’s visit.

Wang Ting-yu, a legislator from Taiwan’s ruling Democratic Progressive Party who is on the foreign affairs and national defense committee, said in an interview that Mr. Azar’s trip was “a break for the Taiwan people.”

He batted away concerns about Taiwan inadvertently getting caught in the crossfire of U.S.-China relations, emphasizing that the island had its own diplomatic and defense strategies.

“If they want to give us a hand, then we appreciate it,” Mr. Wang said. “But Taiwan won’t be any country’s bargaining chip.”